9th January, 2021: We call upon all Indians to awaken to the threat of the massive vaccine fraud being perpetrated on the Indian people & thus organise Nationwide Protests on the 9th of January in our cities, towns, villages, in our fields & factories, in our schools & colleges.

Today the reality is that people are more scared of taking the vaccines than they are of Covid-19. We thus demand complete transparency on all Covid-19 Vaccine Human Trial Data, so as to build a standard mechanism of “Informed Medical Consent” for Covid Vaccine acceptance, or its outright rejection, as we Indians refuse to be used & abused as experimental lab rats for the Pharmaceutical Corporations.

We also condemn the fraudulent & criminal trials conducted upon the people of Bhopal, who were already victims of the Union Carbide Gas Tragedy of 1984. Once again these people are being victimised & used upon in this nefarious and diabolical form of human experimentation. Since there clearly aren’t enough volunteers for these trials, they are entrapping the people from the bastis & slums, with lies & financial inducements. Those part of the Bhopal trials were told that they were being given medicine to prevent Covid-19 infection & were not told that they were part of an experimental clinical trial. Yet the Government sides with the Bill Gates Foundation funded Pharma companies, the same Bill Gates who has a history of indulgence in fraudulent medical activities in India & across the world.

The latest news whereby the Covishield (Oxford-AstraZeneca / Serum Institute of India) & Covaxin (Bharat Biotech-ICMR) Covid Vaccines have been cleared without start / completion of 3rd phase of human trial, under the nomenclature of “Clinical Trial Usage Mode” and the “Emergency Usage Authorisation” is very worrying. Hence, when efficacy has not been proven for the latter, how can the DCGI approve this vaccine under Emergency Use Authorization?

Side effects in the safety trials of Oxford/AstraZeneca Vaccine have been systematically covered up and statistical manipulation has been used to portray the vaccines as safe & effective when they aren’t. Severe adverse events like transverse myelitis, partial facial paralysis, anaphylatic reactions, stoppage of the menstrual cycle, and even death have been faced by many vaccine trial volunteers. All these clearances have been given on pretext of an unproven Pandemic and hence under the guise of protecting wider public interest, which itself is utterly bizarre, dangerous and cause for great concern for every Indian citizen.

Under which Law, which Executive Order?

As for the much used terms, “Emergency Usage Authorisation”, & the “Clinical Trial Usage Mode”, these are both a diabolical mystery. The Government, the Pharma Vaccine manufacturers, the Corporate Media need to tell us, as to under which law, which executive act, is the Vaccine rollout being mandated under these supposed emergency conditions & vague opaque terminologies. Nobody seems to care & the people are not being informed.

Vaccines are Safe? Then why no legal accountability and no legal provision of compensation for the Adverse Effect Victims?

Worse, even as both Serum Institute of India, Oxford/Astra Zenaca & Bharat Biotech, including Pfizer, Moderna, GlaxoSmithKline & others claim to be totally safe, with now ridiculous pronoucements from 110% to 200%, these are no more than lying desperate claims. Yet, since the Government & the Pharma companies are so confident of the safety of the Vaccines trial results, they must immediately declare that the Pharmaceutical-Vaccine manufacturers will be legally liable & accountable to face the Courts, as well as pay adequate compensation for Vaccine induced & related adverse effects, deaths, damages & injuries.

It is highly questionable and suspicious as to why the CEO of Serum Institute of India, Adar Poonawalla, has come out publicly and asked the Government to exempt them of any legal liability?

This was all said on the background that even before the trials are over, more than 5 Crore doses are ready! Ridiculous indeed! So the final vaccine product is already ready & stored, ready to be rolled out and given to hundreds of millions of Indians! These trials worldover are a mere eyewash! As stated by the British Medical Journal (BMJ) – “the mantra of a highly successful trial, is in the trial design itself.”

Serum Institute has millions of doses ready since months, thanks to funding given to them by none other than Bill Gates, who is connected with all Covid Vaccine manufacturing companies & institutions the worldover. Gates is their funder and also this so-called Philanthro-Capitalist is the primary influencer of the World Health Organisation (WHO), in capacity as its biggest donor via his numerous medico-health ventures and partners.

Most importantly, Soumya Swaminathan, currently the Chief Scientist at the WHO and ex-Director General at ICMR, has publically stated that there is no evidence that the vaccines will prevent transmission of the virus or infection, an astounding statement indeed!! Hence, any reason to force vaccines on people for the greater good in the name of herd immunity & protecting the elderly and the immune compromised gets completely diluted! Thus any kind of impositions of restrictions on people via health passports/vaccine certificates for people who refuse the vaccine (as has been stated by members from the Health ministry), is unscientific, unconstitutional & entirely fraudulent.

The supposed Corona Emergency is long over.

It’s been clear from the recent elections held in Bihar, Hyderabad, J&K, to the ongoing massive Farmers protests that the Covid-19 threat is long gone & there is no longer an emergency in our country. We are all being clearly lied to. Thus with no public emergency situation, why the need for Emergency Authorisation Usage, why the rush to unleash these vaccines, which will create health conditions far worse than the Covid situation.

With 1.5 lakh deaths out of 135 crores people in India, the mortality rate is mere 0.01% and with 1 crore infections out of a population of 135 Crores, equal to less than 1% – this was never a Pandemic in reality.

And to make it worse, all of this data is based on the fraudulent RT-PCR testing methodology, for which Portuguese Supreme Court has ruled that it is more that 97% unreliable. The RT-PCR testing kits themselves declare in their testing kit inserts, that its kit is unfit for diagnostic purposes. This test & declaration of the guidelines/protocols for the cause of death, where a person who has tested positive with this fraudulent test are recorded as a Covid death case, are thus highly suspect.

We are all been lied to by the Government, the Pharmaceutical industry, the WHO & the Corporate Media.The fear-mongering instilled by the Govt-Pharma-Media cabal must end & both the sides of this debate must come to the fore so that the Indian people make their own informed choice.

We also condemn & oppose all restrictive practices which are being imposed upon the masses, which we fear, in the course of time will be made mandatory.

Thus we oppose the forced wearing of masks, the forced fraudulent RT-PCR testing, the unnecessary and extremely harmful & disastrous lockdowns which have destroyed our society, our economy, even as we are clearly heading towards a highly centralized technocratic governance system of totalitarian digital tyrannical control, a surveillance state based on digital certification, tracing, tracking, monitoring, control & command quantum grid system based on Artificial Intelligence and Internet of Things (IoT), run through dangerous and Weaponized MMW 5G Wireless technology, and all its submissive slavish compliance.

We clearly see no need for these vaccines, as the Covid-19 induced crisis is long gone. The Vaccines are not here to cure us, but are now being weaponised as a system of control, which will cause grave damage to our health and loss of precious life to our people.

We thus call upon the people of India to take to the streets on the 9th of January, take to the streets in our cities, towns & villages across the country. Let’s raise our voices, stand up with our banners & placards, expose the lies and courageously speak the whole truth.

It’s now about saving each of our lives, our families & our friends whom we love, the people of India, the World. 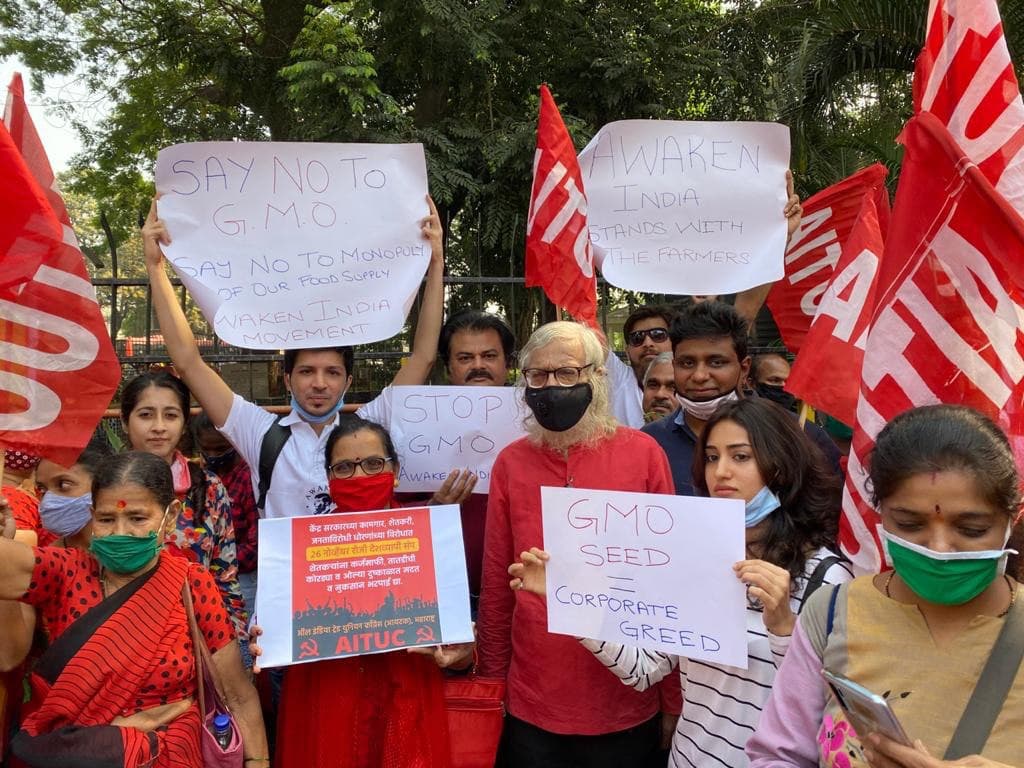 26th November 2020:​ As lakhs of farmers from over 500 peasant organisations march to Delhi, in opposition to the 3 new farmer